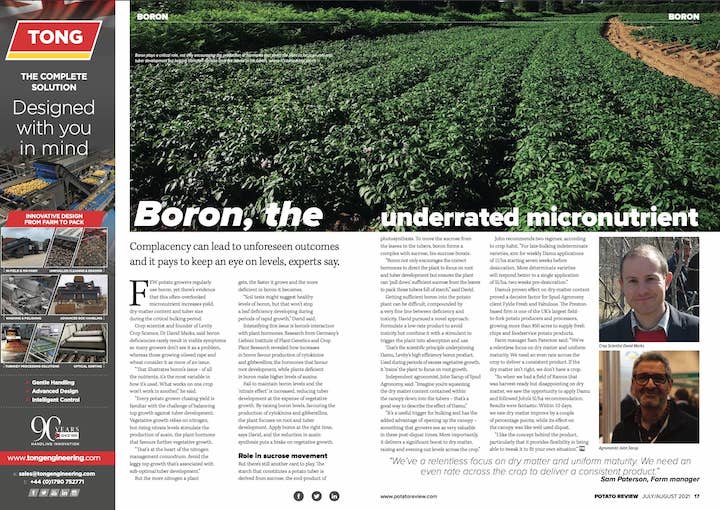 Crop scientist and founder of Levity Crop Science, Dr David Marks, said boron deficiencies rarely result in visible symptoms so many growers don’t see it as a problem, whereas those growing oilseed rape and wheat consider it as more of an issue.

“That illustrates boron’s issue – of all the nutrients, it’s the most variable in how it’s used. What works on one crop won’t work in another,” he said. “Every potato grower chasing yield is familiar with the challenge of balancing top growth against tuber development. Vegetative growth relies on nitrogen, but rising nitrate levels stimulate the production of auxin, the plant hormone that favours further vegetative growth.

“That’s at the heart of the nitrogen management conundrum: Avoid the leggy top growth that’s associated with sub-optimal tuber development.”But the more nitrogen a plant gets, the faster it grows and the more deficient in boron it becomes. “Soil tests might suggest healthy levels of boron, but that won’t stop a leaf deficiency developing during periods of rapid growth,” David said.

Intensifying this issue is boron’s interaction with plant hormones. Research from Germany’s Liebniz Institute of Plant Genetics and Crop Plant Research revealed how increases in boron favour production of cytokinins and gibberellins, the hormones that favour root development, while plants deficient in boron make higher levels of auxins.

Fail to maintain boron levels and the ‘nitrate effect’ is increased, reducing tuber development at the expense of vegetative growth. By raising boron levels, favouring the production of cytokinins and gibberellins, the plant focuses on root and tuber development. Apply boron at the right time, says David, and the reduction in auxin synthesis puts a brake on vegetative growth.