As days are getting longer and the crops [in the ground!] start to grow a lot of talk will inevitably be about how to improve shallow rooting of crops in the field and how once nitrogen (as ammonium nitrate or urea) is applied, lodging can be prevented whilst in the pursuit of maximum yield.

The physical characteristics of modern wheat varieties (their phenotype) are based on the expression of genetic code in response to environmental stimuli, such as, drilling date, soil conditions at/or after drilling, temperature, light levels and nutrient and moisture availability. These are the listed characteristics associated with varieties on the recommended list with standard practise, i.e. in the case of winter cereals, a drilling date of early to mid-October, good soil conditions [in trial plots], warm but falling soil temperatures followed by warming spring temperatures and nitrogen largely taken up in the nitrate-nitrogen (NO3) form. To this end the management of the modern wheat variety is very much set to follow a course of feeding it enough nitrogen to try to ensure maximum yield, [also taking care of other macro and micro elements!] whilst at the same time applying plant growth regulators (PGRs) to try and ensure they don’t lodge!

However, leaving aside the debate that to help improve yields further [under normal circumstances] screening for high-yield phenotypic traits may be more effective when wheat is fertilised with stabilised urea (Wilkinson et al, 2020), in a year such as 2020 we are left with something of a conundrum as to what is the best thing to do!? Much advice will be based around supplying backward crops with largely the same amount of nitrogen [as ammonium nitrate or urea] to rapidly build crop canopies whilst also using early PGRs such as trinexapac-ethyl to aid rooting, both for plant anchorage and water and nutrient uptake (both early and late in the growth cycle of the plant). However, whilst the use of PGRs is a sensible, well researched practise which many will no doubt be doing based on sound advice, the subject of nitrogen uptake is one that should be considered carefully.

Whilst it should be accepted that modern wheat varieties have been bred and selected for, using high levels of nitrogen inputs based on either ammonium nitrate and/or urea [alongside a sufficient supply of other essential nutrients] to achieve yields of 10, 12, 14 or in the case of the highest recorded UK yield, 16.52t/ha the nitrogen use efficiency (NUE) is actually very low! Indeed, 50% of the typical greenhouse gas emissions associated with conventionally grown cereal crops comes from nitrogen fertiliser induced field emissions, mostly as N2O! This means a lot of what is being applied is not being taken up by the crop!

So is there another way to help improve both plant rooting to improve NUE (via improved root scavenging) and both plant anchorage and stem strength in a year when crops are ‘atypical!?’

Following on from the last insight looking at ‘the importance of early N form and accompanying nutrient supply’ it is appropriate to look at how stabilised amine-N as “limiN Technology” supplied within the Elona crop range can help improve plant phenotype to the benefit of both NUE and crop lodging. Unlike nitrate-N when plants take up amine-N (NH2) which has been stabilised to ensure it is taken up as such, plants will adopt a phenotype influenced more by increased root development as opposed to adventitious top growth (Wilkinson et al, 2020). This is due to amine-N being preferentially allocated to root growth [whilst nitrate-N preferentially builds top growth at the expense of root growth]. The increased root growth in turn enables the plant to utilise more nitrogen as both NH4 and NO3 from the soil to give more balanced growth and sustainable tiller production.

Trials conducted by Dr Sally Wilkinson on winter wheat in 2018 demonstrate how via the use of foliar applied stabilised amine nitrogen (SAN) using ‘Elona’ it is possible to both increase root mass and tiller base diameter (Wilkinson et al, 2020) to aid plant form (phenotype). When compared to an industry standard and a control ‘Elona’ containing ‘LimiN Technology’ (SAN) significantly increased both phenotypes (figures 1 and 2) whilst also improving leaf chlorophyll content (figure 3) to enhance light capture and thus photosynthesis. So in a year when crop growth is atypical and in need of something a little different to get them back on track why not consider the use of ‘LimiN technology’ and use ‘Elona’ to help improve crop prospects [and yield!].

Figure 1. Comparison between the effects of SAN (Elona), control and industry standard (IS) foliar N fertilisation treatments on root length.

Elona is physically compatible with all commercially available plant growth regulators for use at pre T0, T0 and T1 timings and has been used successfully in the fields over several seasons to ensure efficacy. Elona may be applied at 1.5-3l/ha according to the situation with repeat applications as required, for further information or to find out where to source Elona please contact info@levitycropscience.com. 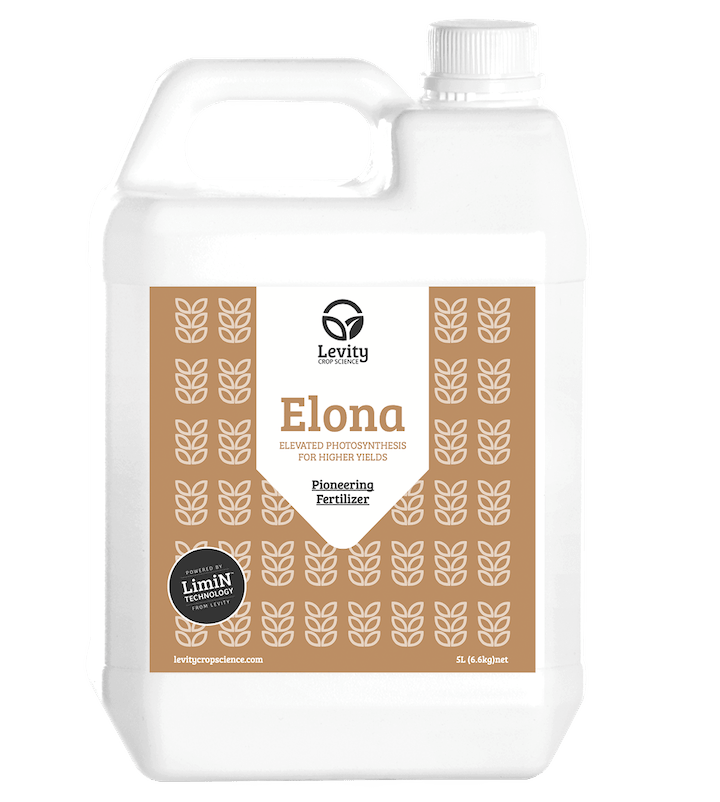 Please contact us for more information about purchasing Elona.