How better understanding of Nitrogen form can lift yield.
"

The biggest yield gains of the 20th century came via the work of Nobel laureate Norman Borlaug who contributed to the breeding of wheat and rice plants that were shorter.

Borlaug realised that when rice is making straw, it isn’t making grain. He helped create modern shorter varieties that were able to produce higher yields and is credited for feeding over a billion people.

The science of where plants grow is known as ‘growth partitioning’. Most farmers plant modern seed varieties where much has been invested in breeding for more grain and less straw.

Yet having taken the effort to grow varieties which favour grain most farmers then go on to use fertilisation practice that does the opposite forcing vegetative rather than reproductive growth.

Indeed this is frequently followed by use of growth regulators to try and stop this fertiliser induced bad growth habit causing lodging.

We are used to writing this off as a nitrogen effect, but is in fact not caused by excess nitrogen rather it is caused by an imbalance in access to nitrogen forms. To understand this we need to consider how crops process the three different plant available forms of nitrogen nitrate, ammonium and amine.

Nitrates are the form of N that require the most processing before they can be used by crops. This processing requires significant amounts of energy to used by the crop, and takes place in the leaf. As nitrates levels build the plant starts to synthesise higher levels of the auxin hormone and becomes progressively more vegetative.

By contrast ammonium and amine forms of nitrogen are processed in a different part of the plant using different processes. They require lower amounts of energy to convert to proteins, are processed in the roots, and have an opposite effect on growth habit – causing better production of a different hormone cytokinin.

In agriculture when we increase nitrogen fertiliser inputs the crop really only receives nitrates in abundance, as due to instability in the environment nitrogen is rapidly converted to nitrates after application whatever the form they are applied as.

This creates an imbalance in growth hormone production – stimulating one type of growth hormone (auxin) far more than the other (cytokinin). It is this imbalance that leads to fertiliser pushing growth partitioning the wrong way and encouraging the plant to grow in the parts we do not need.

At Levity we research how stabilising nitrogen in the beneficial amine form can influence where crops grow. Having had great success in improving yields in crops like potato Levity are now running research on rice and other cereal crops. Here we present data from three independent trials in the Philippines.

The picture below was taken 42 days after transplanting at the Magsaysay site, and the difference in plant architecture is very clear between standard fertilisation (left) and additional Lono treatment (right) with substantially better tillering and plant establishment. 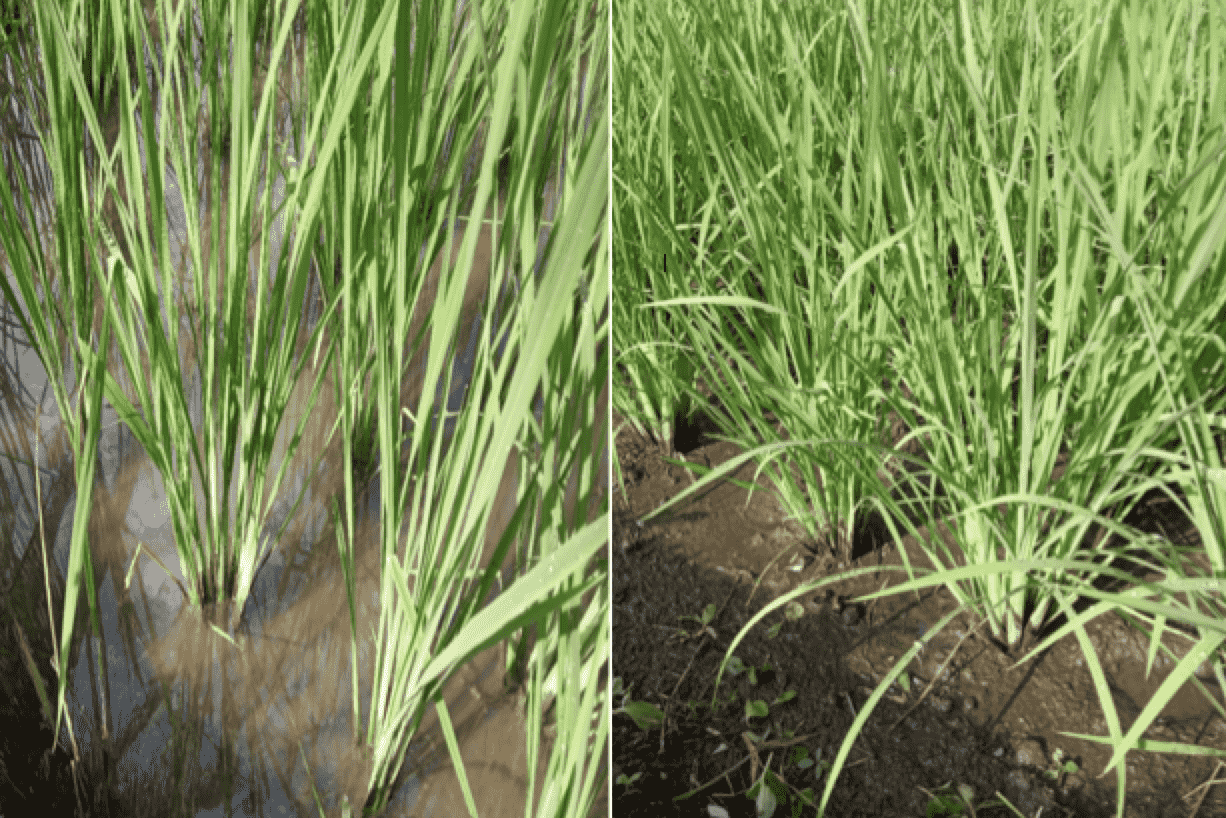 The next picture is from the same trial site two weeks before harvest, and we can see the effect that setting a better growth habit has had on grain development with clear and obvious effects on grain number and size in the Lono treated area (right). 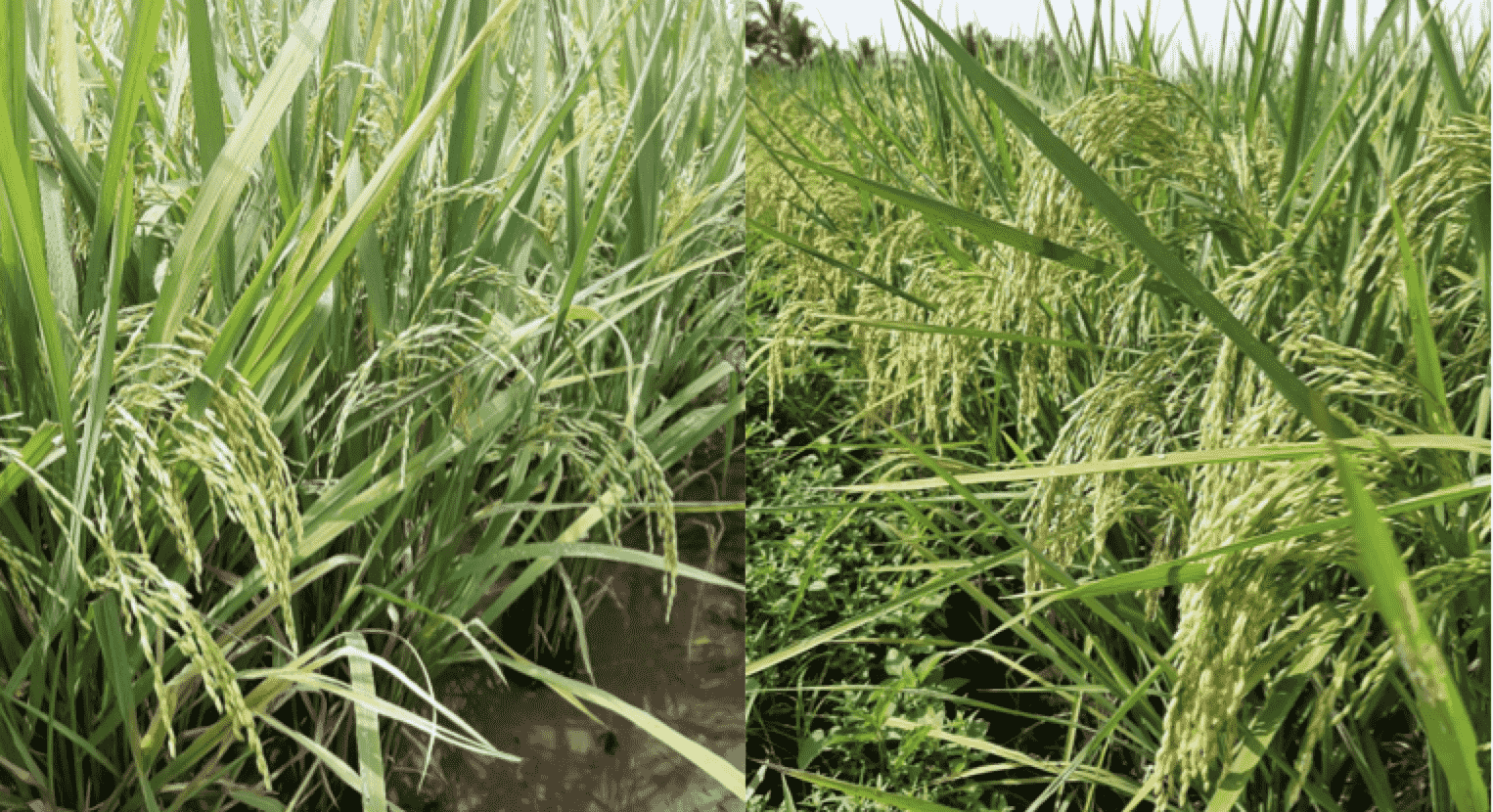 This effect was seen on all three sites looking at different varieties, soils and farm practices. With significant differences in tiller number, grain number, grain size and yield.

When we look closer at the total inputs needed to get substantial yield increases, we can see that it is the stability and form of the extra nitrogen applied that is the driver in gaining the extra yield, not the quantity applied.

The additional 12 litres of Lono provided an extra 1.8Kg of N, and an additional 1.4MT of rice.

This echoes the results from Levity’s research on potato where small amounts of Lono used alongside conventional practice deliver significant yield increases.

There is more nitrogen in 778 Kg of rice than the 1.8Kg extra from Lono, which demonstrates that the yield increase observed is from growth partitioning rather than just access to extra N.

Understanding how nitrogen affects where plants grow (growth partitioning) can help farmers grow crops in a way that gets the best out of the conventional inputs and best supports the genetics of the crop.