Silicon has been demonstrated to have wide-ranging beneficial effects on many crops. A cursory glance at the literature shows how silicon can assist with growth, stress tolerance, insect pest resistance and disease resistance. However, the actual results of applying silicon to crops often fail to consistently provide this full range of theoretical benefits. Here we explore the limitations of silicon, and how understanding them can deliver benefits to growers of a wide range of crops.

Soil is full of silicon so why apply it?

Silicon is the second most abundant element in the earth’s crust. Most soils contain large amounts and can contain more than 50% silicon in their mass. Much of this silicon is unavailable, but the fraction that is available mostly ends up being washed into oceans.

In most soils more plant available silicon is leached than taken up by plants, understanding why is key to unlocking its potential as a nutrient.

Some plants take up silicon better than others

If we grow different crops in the same soil, the amount of silicon the take up can be as much as 15% and as little as 0.1%. Understanding why this is can help up us use silicon better.

Silicon is not very mobile in plants

Silicon is not phloem mobile, therefore its movement through plants is in the direction of water. It gets taken up in roots and moves with water to foliage. It moves up and not down, out and not in. It has this in common with the other non-phloem mobile nutrient calcium.

However, unlike calcium, silicon does not passively enter the xylem when dissolved in soil water. To get into the plants vascular system it must pass through the casperian strip, and to do this plants use influx and efflux transporters to load silicon into and then out of the xylem.

Some plants do this better than others, which leads to a differing ability to take up silicon from soils and transport it to shoots.

Silicon fertilisers somewhat hit and miss, as in plants with a low capacity to load silicon into xylem elevating soil levels is like adding cars into a traffic jam. It simply soaks into the first few layers of root cells, does not get into the vascular system and is not transported up to foliage.

Silicon has two distinct functions in plants. Firstly it forms inert layers of ‘silica gel’ called opals in the epidermis and vascular system that confer physical strength. Secondly, it triggers metabolic responses that improve the plants ability to withstand stress.

Because silicon becomes inert quickly, and its distribution through the plant is limited there are limitations to how efficacious applications of silicon can be.

When applied to soil the plant itself is the main limiting factor in how much of the applied silicon ends up being transported through the roots to the foliage. In most species soil-applied silicon accumulates in the outer layers of roots and is not readily moved to foliage. The portion that does get transported to foliage disproportionately accumulates in the parts of the plant where most transpiration occurs, leading to uneven accumulation in shoots.

Applied to foliage silicon can avoid poor root to shoot transport and directly supply leaves and fruits. However, this is not straightforwards as foliar-applied silicon quickly becomes inert and is not distributed far from contact.

Experiments, where leaves are shielded, show that foliar silicon only accumulates in leaves to which it is applied, and is not redistributed. It effectively has a ‘furniture polish effect’ giving protection to the leaves it hits.

This means that although there are many benefits reported in the literature for helping make plants more resilient against stress, pests and diseases, to get good benefits in most crops silicon must be topically applied at frequent intervals and high doses.

For instance studies on tomatoes show that improving silicon levels in foliage can reduce susceptibility to powdery mildew. However as tomatoes do not efficiently transport silicon to foliage from roots, it has to be applied to foliage to work. Furthermore, as it is quickly made inert, to get the desired effect it must be applied three times a week to ensure all new growth has sufficient opal layers in cuticles. Withdraw treatments and new growth becomes susceptible.

Zeme is the result of a decade of research at Levity CropScience. It uses new chemistry called Si-X that stimulates influx and efflux of silicon into and out of the xylem, allowing much better uptake and distribution to foliage from roots.

Zeme also delays the formation of inert opals, and thus triggers a stronger metabolic anti-stress response in crops as the plant has elevated levels of metabolically active silicon.

Si-X technology allows use of lower doses, and less frequent applications of silicon to be more effective than larger and more frequent doses of conventional silicon fertilisers.

Crops treated with Zeme have an even distribution of protective silicon layers, and a strong metabolic response both of which protect the crop during stressful growing conditions. 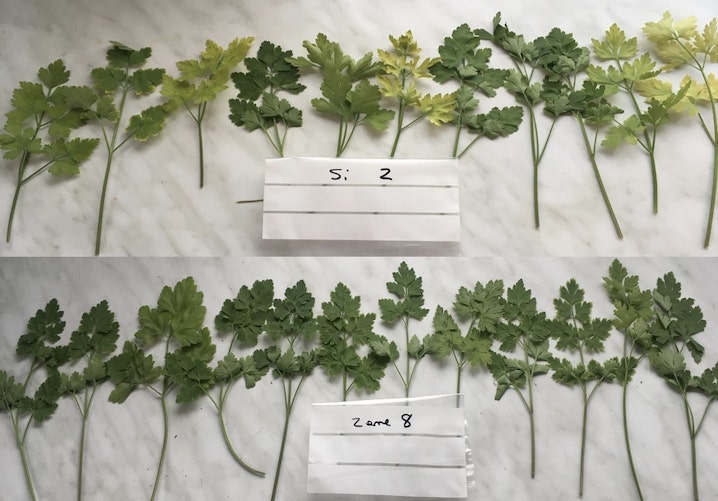 The photo above is from a 2018 experiment at Levity’s Myerscough University College site. Parsley was grown and silicon was soil applied with and without Si-X technology added. It was later harvested and stored for 21 days before being assessed. The conventional silicon treatment (top) has an uneven distribution of Si and most leaves are deteriorating, whereas the Zeme treatment (bottom) has even silicon distribution through all foliage and all leaves are still in good condition.

The more even silicon deposition, better transport and stronger triggering of metabolic activity in Zeme allows it to give good performance at low rates and infrequent applications.

This improved spread of silicon layers throughout the whole plant, that use of Si-X chemistry achieves can be used to enhance the protection of crops from a wide range of both abiotic stresses (poor growing conditions) and biotic stresses (stronger plants are harder for pests and diseases to attack). In the UK 2020 trials showed a 1.3MT/Ha yield increase in spring wheat using 2 1L/Ha applications during a dry summer.

With conventional silicon sources, foliar applications have little effect below ground due to the poor mobility and quick immobilisation following application. Levity experiments on onions demonstrate that by introducing Si-X chemistry foliar silicon applications perform better, having effects below ground.

Zeme has demonstrated good performance in UK field trials on wheat, and during cold and heat stress on a range of crops in Jordan and South Africa. A large-scale independent field trial programme is underway in Europe this season on wheat, barley, potatoes, onions and flower bulbs. 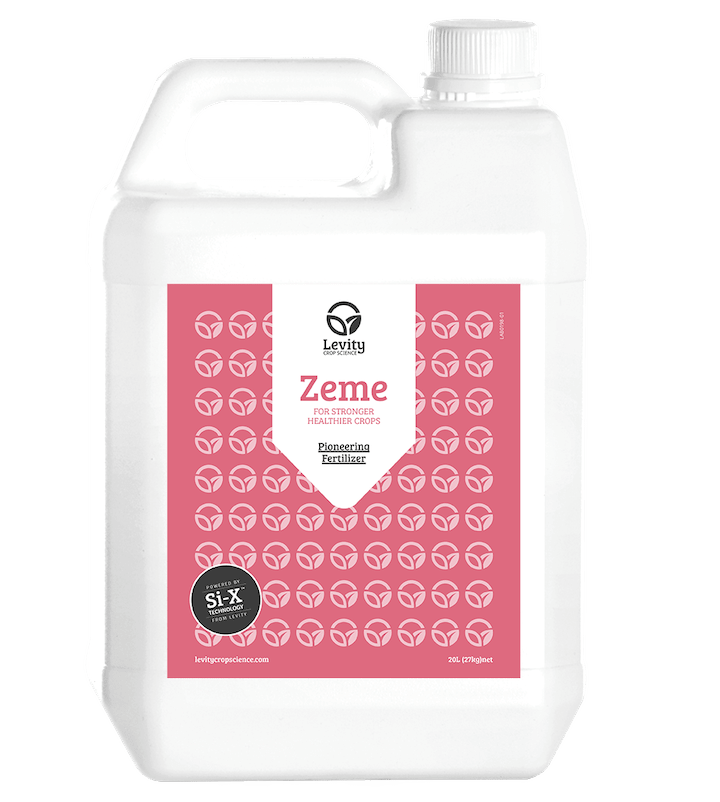 Please contact us for more information about purchasing Zeme