When producing strawberries farmers must balance feeding the plant enough nitrogen without getting excessive vegetative growth. Because of this growers have to take care not to give plants too much nitrogen as more growth can mean lower yield and quality.

To understand why nitrogen tends to favour vegetative growth ahead of fruit development we need to consider two factors.

In this article we will discuss both of these factors, and explore how we can get the crop growing in the right place.

Strawberries waste more nitrogen than they use.

The reason so much is lost is due largely to the instability of nitrogen in the environment. Nitrogen is taken up by plants as one of three forms: Amine (NH2), Ammonium (NH4) or Nitrate (NO3), but it does not stay in the form in which it is applied.

In the environment plants compete for nitrogen fertiliser with microorganisms, these microorganisms change the form of nitrogen rapidly from amine to ammonium to nitrate (with various other steps along the way). Nitrogen changes from non leaching forms to gaseous forms (ammonia gas) which are volatilised, and leachable forms (nitrates) which leach to groundwater.

The crop does not receive all the nitrogen applied and what it does get it takes up mostly in the form of nitrate regardless of what form is applied. The nitrogen not taken up is lost from system via volatilisation, leaching, and competition organisms (weeds, and microorganisms).

The result of this is that strawberry plants do not receive much of the fertiliser applied to them, and what they do get they get mostly as nitrate.

Although nitrate, ammonium and amine nitrogen forms all contain nitrogen and can be used as sources by plants, they are chemically quite different and are processed by the plant differently.

Nitrates are processed in leaves, where the plant converts them into amine nitrogen (what proteins are made from) using nitrate reductase enzymes taking time and energy. As nitrates accumulate in leaves plants start to make more of the growth hormone auxin, leading to increasing emphasis on vegetative growth.

Amine nitrogen is processed in roots and is more quickly and easily converted to proteins requiring less energy to do so. Amine nitrogen accumulation does not lead to increased auxin synthesis, but instead increases production of the cytokinin growth hormone, leading to a greater emphasis on reproductive growth.

Levity have used this understanding of how nitrogen form influences where plants grow to develop more effective ways to feed strawberry crops.

LimiN technology stabilises amine nitrogen, preventing it from changing into other forms after it is applied to the crop. This has two advantages. Firstly far more of it is taken up, rather than lost to the environment. Secondly it encourages the crop to allocate more resource to flower and fruit production rather than vegetative growth.

When crops allocate more of the growth from nitrogen to reproductive growth, yields increase. A phenomenon known as ‘growth partitioning’. 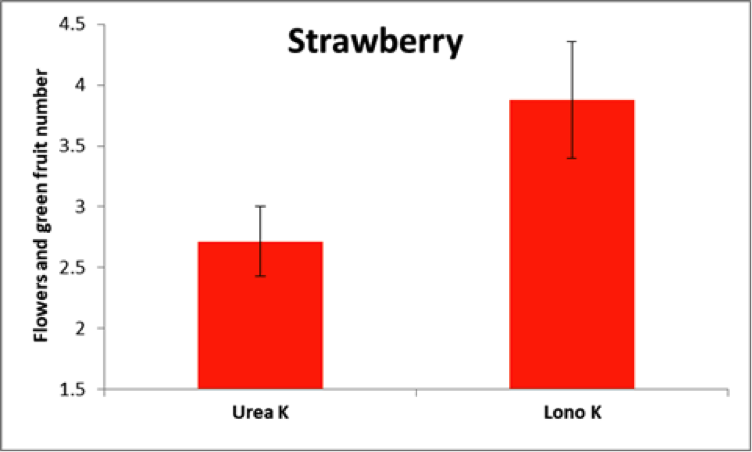 This increase in fruit and flower production is partly due to more of the nutrients being taken up, and partly due to a process known as ‘growth partitioning’ whereby the plant has invested more in reproductive growth.

Field trials in California confirm the effect on farm, demonstrating significant increases in yield when used alongside standard fertiliser programmes.

Here we present some results from a trial in California where Lono-K (Marketed as SizeN-K in the USA) was used 3 times at 1 gallon per acre in addition to a standard fertiliser programme.

Lono-K gave progressively higher yield increases as the crop invested more in growing in the right place. Indeed the trial ended early as the farmer turned the whole crop over to the treatment.
Trial conducted by Omex USA (Levity’s US distribution partner), with Nutrien-Salinas.