New fertilizers listen closely to what potatoes are telling them

Novel forms of fertilizer have often been dismissed as snake oil, but a new generation of products has been developed, informed by potatoes’ physiology.

From a scientific point of view, fertilizer technology is still very much in its infancy. The forms widely used today have been adopted because they’re easy to source in large quantities. They have largely been designed by chemists rather than with the crop’s physiology in mind. As a result, fertilizer uptake by plants is an inefficient process, with rates of recovery for nitrogen fertilizers in the region of 25 to 35 percent.

But the tide is turning. Fertilizer technologies are being developed that are physiologically-led and underpinned by sound, peer-reviewed scientific research.

Why nitrogen is crucial

Nitrogen is vital for plant growth because it’s a major component of chlorophyll, the compound by which plants use sunlight energy to produce sugars from water and carbon dioxide (photosynthesis). It’s also a major component of amino acids, the building blocks of proteins.

Some proteins act as structural units in plant cells, while others act as enzymes, which facilitate the many biochemical processes essential for life. Nitrogen is a component of energy-transfer compounds, such as adenosine triphosphate (ATP), which enables cells to conserve and use the energy released in metabolism. It’s also a significant component of nucleic acids such as DNA, the genetic material that allows cells, and the plant itself, to grow and reproduce.

Partitioning is the process by which plants divide their energy among their different parts. In potatoes, it’s the tradeoff in proteins and carbohydrates allocated toward their leaves (canopy growth) and those apportioned to the roots (uptake of nutrients and water) and tubers (reproductive growth).

Nitrogen availability has a strong effect on partitioning. Plants take up three forms of nitrogen: amine (NH2), ammonium (NH4) and nitrate (NO3). Most nitrogen applied to the soil is converted to NO3 from NH4 by soil bacteria, including Nitrosomonas spp. and Nitrobacter spp. Nitrogen taken up by plants as nitrate (NO3-) must be first converted to ammonium (NH4+) before it can be used by the plant, and this has a consequent energy cost. In fact, it takes 12 times as much carbon to process a unit of nitrate into a plant protein than if the nitrogen is taken up in the amine form (NH2).

On the other hand, if nitrogen is taken up as NH4 or NH2 , it can be immediately used in the synthesis of amino acids and other organic compounds, conserving energy that may be used for growth.

How do you influence this?

Over-application of nitrogen in search of higher yields can lead to excessive top growth at the expense of tuber growth. Because of the required conversion process, any nitrogen applied as a foliar fertilizer in the nitrate form reduces photosynthesis as the plant uses its energy, changing it into a usable form.

The formulation of nitrogen fertilizer is therefore very important to the energy efficiency of the crop, influencing the amount of energy wasted transporting nitrates to the leaf to be converted to NH2.

One of the functions of nitrogen in the plant is to influence the production of plant hormones, particularly auxins and cytokinins, which influence plant growth. Auxins are made in the potato leaves and transported to the roots, with the opposite holding true for cytokinins, which are made in the roots. It’s the balance between the two hormones that affects the way the crop partitions into vegetative (stems and canopy) and reproductive growth (tubers).

The nitrate form stimulates plants to produce auxins, which is why over-application causes excessive top growth in the potato. If the plant has access to nitrogen in the form of NH2 , it can use this locally, expending less energy to convert it to protein without triggering unwanted auxin synthesis. Cytokinin production means the potato plant produces more lateral growth, is bushier with a more fibrous root system, and has increased tuber development.

Which form of nitrogen is best?

Stabilized nitrogen fertilizers aren’t new, but previous products have been based on urease inhibitors such as Didin and/or bacterial inhibitors such as nitrapyrin. Both have a direct impact on the process of mineralization, which although favorable in theory, is not always in practice.

Levity, which has exclusively partnered with Omex in distribution of these products in North America, has developed different a way of stabilizing urea, which ultimately renders nitrogen in the NH2 form unrecognizable to the bacteria that would normally reduce it. In this amine form, there’s supply of a more efficient form of nitrogen. The nitrogen supplied is more energy-efficient with less carbon used, as it doesn’t require conversion to ammonium before the plant can utilize it. The amine form also encourages more reproductive growth.

Levity and Omex have conducted replicated field trials in four countries over four years, introducin their unique amine nitrogen product Lono—also known as SizeN—on the U.S. market. SizeN has been tested on over 40 different crops, including more than 10 potato varieties. In a trial conducted in the UK in 2016, the effect of SizeN on potatoes was investigated and compared with two non-stabilized foliar nitrogen formulations, supplying a similar level of nitrogen to the crop. The results have been peer-reviewed and were published at the Crop Production Northern Britain Conference in Dundee earlier this year.

Which approach is best?

Exposure to small bursts of NH2will have an effect on plant architecture that’s disproportionate to the quantity applied, because of its influence on the plant’s hormones. In potatoes there are four key timings when SizeN can be applied that will influence tuber production in the crop: tuber initiation, early bulking, mid-bulking and late bulking.

All varieties of potato can benefit, but in some there may be a greater effect. For example, Innovator is a notoriously shy tuberizer, and if it’s subjected to any stress, low yields are often the result. In Dutch trials, significant increases in the marketable yield of Innovator of 2 to 3 tons per acre have been recorded. Rooster and Annabelle have responded similarly in Irish and French trials, with smaller increases of 1.1 tons per acre found in Brooke and Shelford in the UK.

The response a variety has depends on its characteristics. SizeN can be used as an agronomic tool to influence the marketable yield of the crop. For seed, or where small tubers of even size are required, earlier application timings will help achieve the required size fraction.

For more information on SizeN products, contact Omex Agrifluids at (559) 661-6138 or omexusa@omex.com. 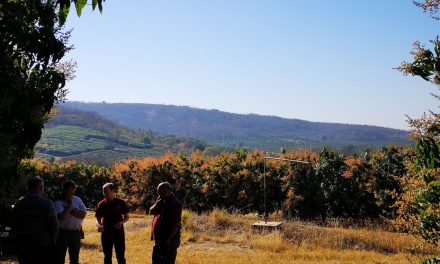