While nitrogen will always be the driver of potato production, relying solely on conventional sources supplied via the soil results in weak vegetative growth, according to David Marks, of Levity Crop Science.

He said: “When we feed crops N, they mostly take it up as nitrate, which means plants mostly use their N to put on top growth. In crops like potato, farmers must manage conflict between applying the N their crop needs, and the crop’s natural propensity to use that N to grow foliage rather than tubers. This leads to a reduction in tuber setting and bulking.”

To combat this problem, Levity Crop Science has developed Lono for Potato, a foliar-applied product which exposes the crop to bursts of amine N, which helps to direct growth towards tuber development.

To ensure the size and number of tubers are optimised, Dr Marks suggested one application at tuber initiation and a further three applications during bulking, using rates of about five litres/hectare.

Independent trials, which took place across Europe last year, showed use of this approach resulted in a yield increase of about 10 per cent, which equated to an extra four tonnes/ha (1.6t/acre) of potatoes on average. However in France, the associated yield increase was up to 30 per cent.

Dr Marks said: “The full programme would cost the farmer about £70/ha and the average yield increase has typically resulted in an extra £800 worth of potatoes, so to me it is a no-brainer.” 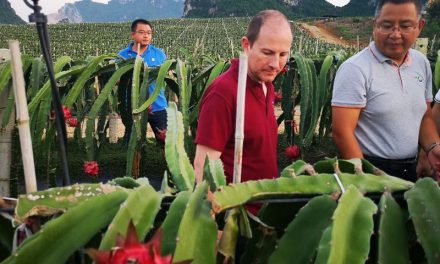 Levity wins exporter of the year in Northern Powerhouse Awards